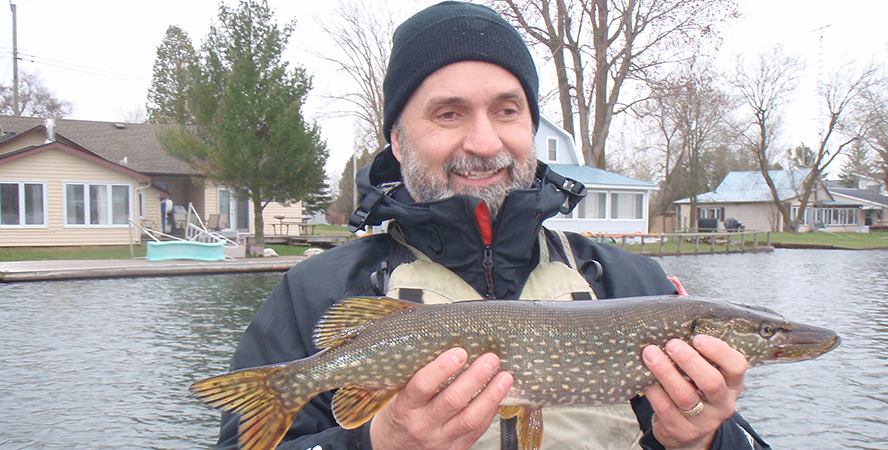 Lawrence with first Pike of 2019

Getting out on the Upper St. Lawrence River for the opening of Northern Pike and Walleye season has become a sort of ritual. It entails arriving at the launch around 1 a.m. after the crush of boats are launched, and there truly are a lot. This year it was my buddy John joining me for the opener.

I know that part of the river pretty good, so even with a partner who was unfamiliar with the hazards taking the helm of my Ranger 620 Fisherman, I wasn’t worried. But, I hadn’t expected the welcoming committee that was waiting for us.

We had just moved out from the launch when a second boat downstream fired up its main motor and came directly for us at a good speed. Our running and anchor lights were on, so I knew they should be able to see us even in the mist and pitch-black. A first for me — the Ontario Provincial Police and a Conservation Officer with the Ministry of Natural Resources and Forestry had joined forces for the night. Things got interesting quick.

The CO asked me for my fishing license, and I explained that being blind, I was exempt. He then asked for proof in the form of a CNIB card. I explained that I never bothered getting a CNIB ID card for the blind as I always carry my guide dog identification card that includes a photo of us both. Unfortunately, I was without this ID as well due to my currently being between dogs. I then found myself in the unusual predicament of having to prove that I’m blind, as it was the CO’s opinion that anyone without a fishing license could make such a claim. Fair enough, I began digging through my wallet for anything with braille, and finally came up with my Ontario Government ID – a sort of non-driver’s license that I had applied braille to with my OHIP and SIN numbers. I pointed out the braille on the back of this ID card,  being careful to explain that the ID was not an actual driver’s license – there were subtle differences.

While I was dealing with the CO, turns out John was searching for his Pleasure Craft Operator Card to show the OPP officer. Unfortunately, he forgot the Card at home. No problem I thought, and having convinced the CO that I was truly blind, I then set out to convince the OPP officer that I, in fact, was legally entitled to operate my own boat being in possession of a Pleasure Craft Operator Card myself. My bad, I did such a good job convincing the CO I was blind, I now had an even tougher job arguing that I was legally allowed to drive my own boat.

Well, as you can imagine, neither the OPP officer or the CO thought it was in any way remotely a good idea for me to take over the helm of my Ranger powered with a 250 HO ETEC. I assured them both that I was in full agreement, and that my insurance company and sponsors were also of the same mind. I simply wanted to avoid John being ticketed, and our first day on the water fishing Walleye and Pike being terminated before we even got a line in the water. So, if that meant I would need to take over control of the electric trolling motor, then so be it.

There we were, four grown men in two boats at an impasse. John mentioned to me afterwards that neither of the officials seemed too happy with my being in legal possession of a Pleasure Craft Operator Card, even if I had made it clear I would never take the helm and fire up the ETEC. Thankfully, the OPP officer suggested we bring to a close our encounter, and issued warnings for John not to forget his Operator Card, and for me to get myself a CNIB ID card. I thanked each for the important work they were doing to safeguard our fisheries and maintain order on the water. I think we were all somewhat relieved with the outcome.

We departed on good terms, but not before my fielding a few questions about the top speed of my boat, and what my Ranger – ETEC package would cost. Turns out that if john and I had made a run for it, we had a 6 mph speed advantage over the OPP’s watercraft (LOL).

I have to hand it to these two officers, they were pulling the midnight shift to check boaters as they were leaving the launch, which in hindsight, was pretty smart. Better catch the ones that may have been up drinking or were improperly equipped for a night of fishing on a river with plenty of obstacles and other boats, on water that was 42 degrees F, about 5 degrees C. In essence, protecting people from their own stupidity. If it was just about issuing tickets, then John and I would have both received one. Our thanks go out to these two dedicated officers and all the rest for all they do to ensure the future of our fish and the sport of fishing.

Oh yes, the fishing sucked. The dam just below us was closed due to flooding in Montreal resulting from high water levels on the Ottawa River which flows into the St. Lawrence just up-stream from the city. The decision to hold back the flow of the St. Lawrence as much as possible meant the river was up about 1.5 meters and the current was quite slack making it possible for the fish to roam freely throughout the river. Just the one Pike to show for our efforts.

The high water also meant the docks were unusable. Not only did this mean my having to get leg waders so I could manage the boat coming off the trailer, but I also had to crank the boat back on to the trailer at the end of our adventure, which included – my favorite part – pulling my truck ahead about 20 feet so John could get out of the boat without having to enter the water. I can only imagine the looks when I walk up to the driver’s door of my Ford with my white cane, get into the truck and pull ahead with John calling out instructions from the bow of the boat now secured on the trailer. It’s never more than a dozen feet, but still…

**Catch my weekly Blue Fish Radio podcast over most podcast providers, your smart home speaker, or by visiting: www.BlueFishRadio.com