Over this past winter Maestro, my 8.5 year old Burnese Mountain guide dog, was found to have ligament issues with his right rear knee.  Experts with the Mira foundation concurred with Maestro’s local vet that any surgery on the bad knee would most likely lead to problems with the other.  Last February, after consulting with Mira’s head guide-dog trainer, we took the decision to retire Maestro.  None of us for-saw that Maestro would also soon be suffering from cancer.

It’s mind-boggling just how fast a dog’s health can slip away.  Over the next 3-4 months, following Maestro’s retirement, he went from being a super active dog, to one whose quality of life had slipped below the point of no return.  It was one of the hardest things my young family had ever witnessed. I owe a huge thank you to my wife Anne for all she did for Maestro during this time, as much of his care rested in her already full hands with my being at work.

During Maestro’s period of illness my heart was broken twice each day.  Once in the morning when leaving for work and having to tell Maestro to, “stay”, and the second time when I came home and took him for a walk along the river.  Each evening the walks grew increasingly shorter.

We knew the time had come when, one evening after the family had finished dinner, Maestro couldn’t summon the energy to go further than the end of our driveway.  His will was strong, but not his heart. There were other signs of his failing health too, but out of respect, let’s just say all signs pointed to the same conclusion.  It’s a moment one never wants to contemplate, but it’s a horrible day that arrives nevertheless.

One of the first public commitments I had to attend after Maestro’s passing was a ribbon cutting for the Governor General of Canada’s new exhibit, “From Far and Wide – Honouring great Canadians.  I was selected to be part of the exhibit for my work on improving life for Canadians with disabilities and low literacy, which led to my receiving the Meritorious Service Medal. On one of the 8-foot panels there was a detailed description of my contribution to society, and a photo of Maestro and I standing at the end of a fishing dock.  When my wife began to describe the photo, it was all I could do not to cry; however, Anne claims my eyes did water. 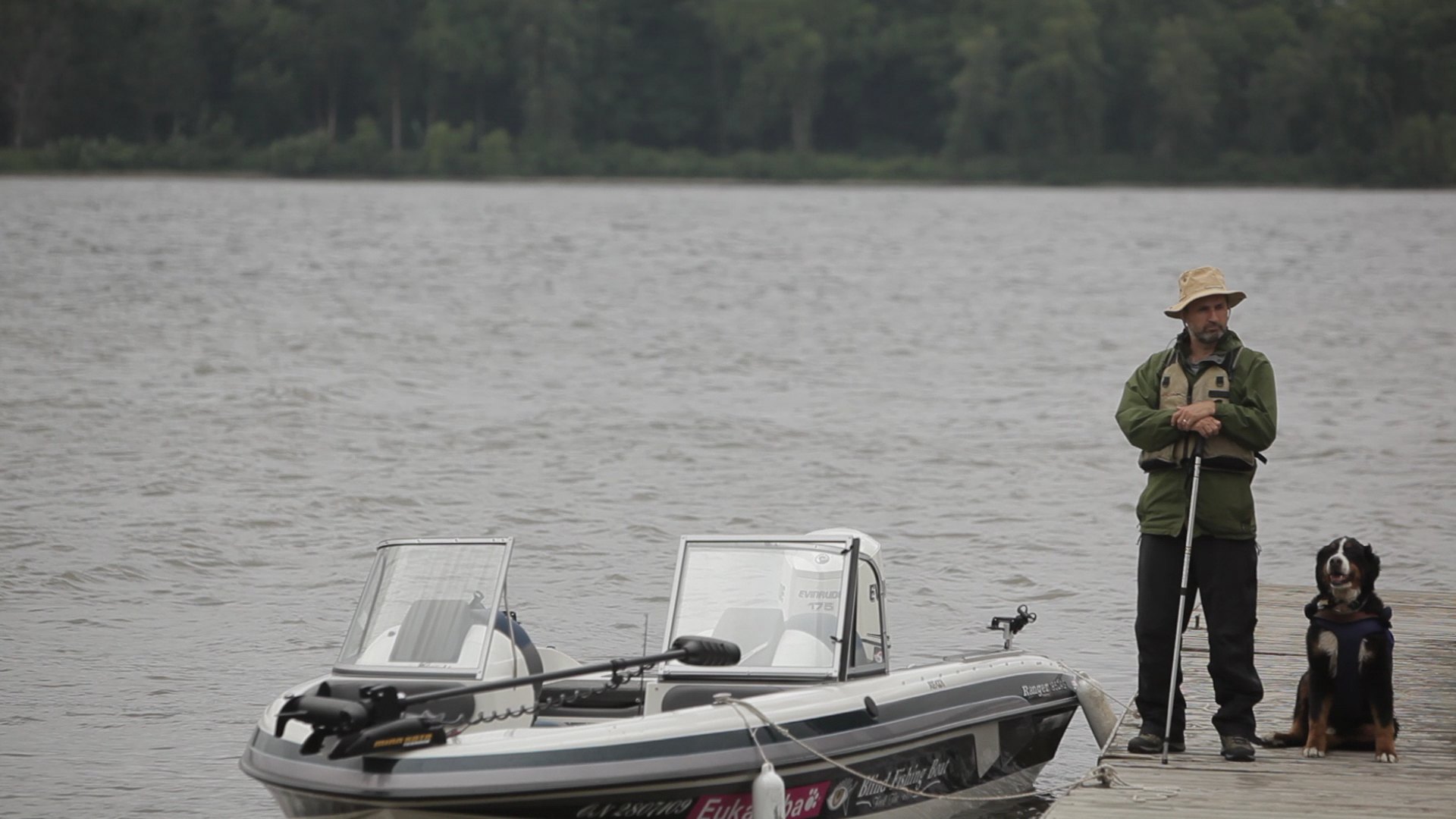 I miss Maestro.  Every day I get up and he’s not there to escort me down the stairs to the main floor.  He’s not there to walk with me each morning on our usual 2-mile walk along the river on our way to work.  His bark no longer rings out the minute we re-entre our home at the end of the day and he leaps up the few steps to the landing and proclaims the day a success.  And most of all, he’s missing on those early mornings when a buddy shows up at my house at some un-godly hour, the side door to the house is opened, and Maestro bounds out and leaps into the rear of my SUV — refusing to get out until we arrive at the boat launch.  My wife had even purchased a folding ramp so Maestro could walk up – saving me from having to lift 90lb of squirming fur.  He only got to use the ramp a few times.

Maestro was no stranger to travel.  From Port Alberni on the west side of Vancouver Island to Cape Spear on Newfoundland’s east coast, as well as trips to Yellow Knife, Inuvik and Iqaluit in Canada’s north, there weren’t many corners of Canada he didn’t visit.  He was a totally bilingual Canadian dog; having grown up in Quebec.  I also wouldn’t be surprised if he was one of the first Burnese Mountain dogs to visit the Carolinas in the U.S.A., or Florida, or for that matter, California.  He was such a huge hit in L.A. I started telling people who stopped me on the street that he was a “bog”, from Canada — half dog and half bear.

This summer sure wasn’t the same without Maestro though.  I also haven’t had the desire or time to get trained with a new guide dog either, with every weekend up until mid-October being booked solid with shows, tournaments and outdoor adventures.  Anne’s 2-year old 2.5 pound Yorky has been trying hard to fill Maestro’s boots, or in this case, a boot. Even though Maestro may have taught her much about safe road crossing, it’s just not a good fit. 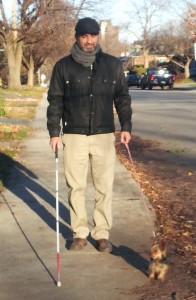 Photo of Lawrence walking with his 3-pound yorkie Dixie

To be frank, losing Maestro is like going blind all over again. He was such a big part of who I am as a person. It’s not until one experiences the loss of something so intimate that one could ever imagine what it’s like to have both your best friend and sight taken away at the same time.  It’s only since his passing that it’s hit home just how profound a roll Maestro played in my life.  After seven years, he and I were one. 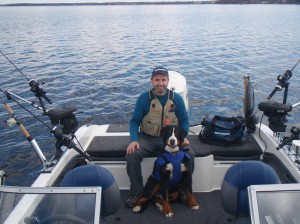 Photo of Lawrence and Maestro sitting in the boat

Dogs have been part of my life going all the way back to my childhood when doctors first determined I was losing my sight, and I would pretend my family’s pet was my guide dog. I did inevitably, get a guide dog in my early 20’s following a near-fatal accident involving my being struck by a car that was travelling at over 100 km/h. Maestro was guide dog #5.

Over the very short seven years Maestro was in our life he was still part of quite a few significant moments. Maestro arrived very shortly after our youngest daughter was born.  He watched her learn to crawl, and played a part in her learning to stand and walk by allowing her to grasp tiny fists full of his fur.  Maestro was there to welcome our new-born son home from the hospital as well, and was soon giving rides to the little cowboy on his back. One of our favorite games during family walks involved Maestro waiting just before a bend in the path while the kids ran ahead and hid behind trees. After counting to ten, I’d release Maestro who would then tare around until he found both — causing the kids to squeal with laughter.  When my wife brought an 8-week old T-Cup Yorkie home, Maestro could have easily crushed her under one paw. He more than tolerated her nips and yips though, and it wasn’t long before they were best friends. 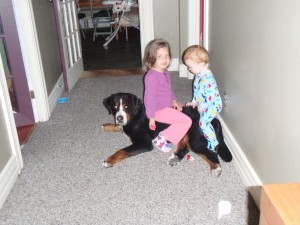 I always have mixed feelings about getting a new guide dog. The process is exciting, but I can’t help feeling guilty like somehow I’m betraying a best friend. And then there are the comparisons.  It’s difficult not too, but I just can’t help thinking how each new dog just isn’t measuring up to the standards set by those who came before. The first few weeks are hard, but then something happens and I start to appreciate the personality of the new dog and my heart starts to open up. However, feelings of frustration re-surface time and time again over the first year as I’m constantly reminded that the new dog just doesn’t know all the places I like to go. In Maestro’s case, I’m not sure if there will ever be another dog that will measure up. He definitely raised the bar.

I can’t keep mourning Maestro for ever.  Winter is coming and a white cane is no match for deep snow. If I don’t get trained with a new dog soon, my connection with the outdoors will become strained.

The kayak and boats will soon be put away, camping season has already come to an end, and thoughts are already turning to fishing through the ice.  There’s no getting around it.  I need a guide dog with a very bushy coat and sure footing on black ice. It’s time. 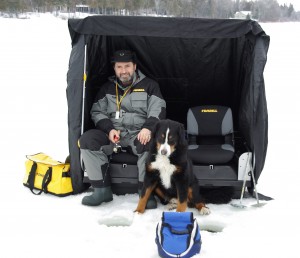 Photo of Lawrence and Maestro sitting in an ice fishing shelter

I miss you Maestro — my friend. Thank you for dedicating your life to making my life safe. Thank you for the boost you would give to my spirits when they were low and for the joy you brought to my family.  Thank you for introducing me to all the amazing people we’ve met over the past 7 years.  And most of all, thank you for your totally unwavering friendship, and yes, your love. I love you too my friend.

Photo of Maestro lying down on his belly facing the camera