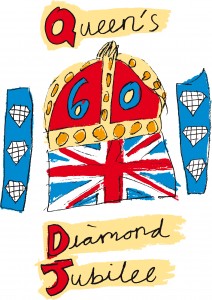 On February 12, 2013 I was honoured to be awarded the Queen Elizabeth II Diamond Jubilee Medal for the technology training program I developed and over-saw for blind Canadians seeking to stay abreast of advancements in office place technologies. 35 blind professionals and a team of trainers spent five days at the CNIB’s Lake Joseph Centre participating in 12 hours of training each day as well as networking activities in the evenings. I was nominated for the honour by both my Director and Director General at the Department of Agriculture and Agri-Food Canada, and was awarded the Medal by my Assistant Deputy Minister, Mr. Greg Meredith.

The commemorative medal was created to mark the 2012 celebrations of the 60th anniversary of Her Majesty Queen Elizabeth II’s accession to the Throne as Queen of Canada, as well as the thrones of six other countries, upon the death of her father, King George VI, on 6 February 1952. The Queen Elizabeth II Diamond Jubilee Medal is a tangible way for Canada to honour Her Majesty for her service to this country. At the same time, it serves to honour significant contributions and achievements by Canadians.

The following excerpt from a letter sent to the Deputy Minister of my department, Mr. John Knubley, from the President of the CNIB, Mr. John Rafferty, explains the significance of the training programs I developed and implemented in partnership with the CNIB:

I’m writing to let you know about the timely and valuable support an individual in your employ is providing the CNIB, and to bring to your attention a training opportunity employees with visual disabilities in your department and the government in general should find of benefit.

Mr. Lawrence Euteneier, a manager in the Rural and Cooperative Secretariat at Agriculture Canada, in his volunteer position on the Board of Directors for the CNIB Lake Joseph Centre, proposed that the CNIB provide Canadian professionals with visual disabilities technology training.  The training would both assist with career advancement and productivity by training such professionals to make the most of advancements in information and communication technologies.

The CNIB has since made Mr. Euteneier chair of an Advisory Committee on Technology Training.  Mr. Euteneier has considerable experience in this area having both served as the “Advisor on Technical Accessibility for the Senate of Canada, and by developing and deploying world-leading technology aimed at closing Canada’s digital divide experienced by people with literacy or disability issues.  Mr. Euteneier’s receipt of the “Public Service Award of Excellence” and the Governor General’s “Meritorious Service Medal” further speaks to his expertise and commitment in this regard.

As you are no doubt aware, advances in workplace technologies are being introduced at an ever increasing rate.  What you may not know is that a number of these technologies are not necessarily built to comply with accessibility standards or best practices.  Further challenging blind professionals is a nation-wide deficit in training programs developed for such individuals to maintain maximum proficiency through the use of technology.

The market the CNIB wishes to address by offering a technology training program includes those blind or visually impaired Canadians who currently use computers, but who would like to know more about how to better utilize what they have at hand and are interested in developing the skills needed to adopt more recent innovations  relevant to the working professional.  Programs such as Windows Seven and MS Office 10 are examples of two recent office place innovations for which customized training will be of assistance.

Federal employees with vision loss will make up a sizeable portion of the CNIB technology training program’s intended beneficiaries.  To this end, I have attached a description and registration form for the training program the CNIB plans to begin delivering this September.  We hope this information will assist your employees with visual disabilities and their managers to plan their training objectives for the year.  Please feel free to share this information with your counterparts in the other federal departments.