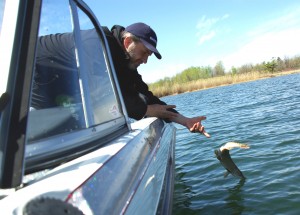 In my article, “So What Do Fish Hear”, we focussed on how fish hear using their ears.  In this article, the focus will be on how they listen through their lateral lines.

People take hearing for granted until it stops working, and then they realize just how important a role it plays in almost everything we do.  The point being, our own marginal understanding of the role of hearing makes it even harder to comprehend the different ways fish hear and how they combine their different hearing senses to survive.

After I lost my ability to use sight to carry out daily activities, I began using my hearing more.  It never got any stronger, I just got better at using it.  Now, if I drop a coin on the floor in a store while at the cash, I can not only tell what denomination the coin is based on the sound of the coin hitting and then rolling along the floor, but place my hand exactly on the spot on the floor where the coin came to rest.  Sighted people think they perform these same tasks using their eye sight exclusively, but put these same people in the forest with a gun and their first instinct is to aim an shoot in the direction from which they hear the sound of what they believe to be a potential life-threatening animal or their intended pray.  It’s exactly this reflex response that hunter safety courses are intended to repress, and it’s precisely this response that predatory fish spend their entire lives honing.

On average, fish can see well between 5 and 10 feet, depending on water clarity and light penetration.  Contrast this with a fish’s ability to hear higher frequency sounds with their ears originating from as far away as 30 feet, and under ideal conditions, low frequency sounds using their lateral lines that originate from much further, and it’s no wonder then that the primary sense fish depend on for first detecting the presents of food or danger is hearing.

Lateral lines on a fish can detect sound vibrations (cycles / hertz) from 80 all the way down to one vibration (Hertz) per second.  A human with typical hearing detects sound waves or vibrations from as low as 20 per second all the way up to 20,000 per second.

A sub woofer in a typical Surround sound system outputs between 20 and 200 cycles or vibrations or Hertz per second.  The lowest frequency still considered a musical tone is about 12 Hertz.  Humans can detect by touch tones between 4 and 16 hertz, compared with a fish that can hear tones as low as one cycle per second with their lateral line.

Fish can detect unseen sources of low frequency sounds such as those produced by wobbling crankbaits from quite far off.  They can also use their lateral lines to determine a baits trajectory fairly accurately, which explains how Walleye are able to swim upwards considerable distances and intercept vibrating baits being trolled.

Fish use their lateral lines much the same way I now use my ears.  They can not only determine in what direction to venture forth to find that ball of bait, but move in with precision on pray under no light conditions.  Yes, even blind fish can find food.  What this means for us fishers is that negative sounds need to be limited as much as possible since they give away both our presents and location, and positive sounds need to be exploited in ways that suit the conditions we are fishing.

A bait making too much noise under ideal visibility conditions will draw a fish’s attention, but this may work to your disadvantage if it means a fish now has ample time to determine that your offering is artificial.  Reaction baits depend on the element of surprise causing fish to respond compulsively, which is why they don’t need to offer exact visual reproductions of pray.

For example, willow leaves on a spinner bait transmit maximum visual flash and almost no sound, which is why we use them for burning in water with moderate to high clarity.  A single large Colorado painted blade offers almost no visual flash, but instead emits a throbbing low frequency sound intended to provide fish with an audible target.

Using sound to alert fish that pray is in the area is the premise of tools such as the “Hydro Wave”.  Other less technical ploys involve rhythmically thumping the bottom of the boat, revving an outboard motor, slapping the surface of the water, adjusting the throttles on boats equipped with dual engines to create harmonic resonance, etc.  More specifically, we can bounce jigs off the bottom, crash crankbaits into structure, drop soft plastics through the water column, or select baits with internal noise makers.  The important distinction to remember  when determining just how much noise you want your bait to make depends on what point fish will actually see your offering.  If the idea is to draw fish in so they will either react impulsively, or visually target your bait at between five to ten feet out, then minimal erratic sound is best.  If conditions call for deploying baits that allow fish to target your bait using hearing alone, such as in heavily stained water or at night, then baits that emit steady sounds fished in a predictable (non-erratic) fashion offer the most appropriate target.

Fish living in the crystal clear waters of the south Pacific can see extremely long distances, just as their pray can.  There’s also remarkably little cover.  Consequently, large predatory tropical fish need to swim miles each day to find food, and the way they find those humungous bait balls surrounded by every living thing in the sea for miles around is by listening.  Even in our waters many species of predatory fish migrate from one feeding opportunity to another based on what they hear.  .

Fish would not survive if they had to depend on sight alone to locate pray.  Their dependency on sound is what distinguishes us from fish as our own environments become increasingly cluttered with noise – a relatively recent phenomena in terms of human evolution.