Each year Jenda Paddle Sports in Ottawa kick off the summer with a kayak fishing tournament. Held on the Rideau River, winners are determined by the longest fish for each species, including a prize for smallest fish over-all. The format is catch, photograph and release, and then turn in your digital camera’s card at the end of the day if you have an entry you think warrants entering. 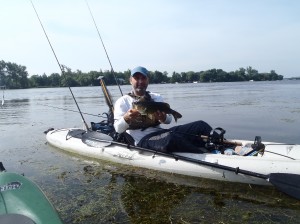 Jason Kirby, owner of Jenda Paddle Sports, organizes the event with assistance from his wife Laura and quite a number of key sponsors associated with kayak fishing. Jason always includes a great BBQ for competitors as part of their entry fee.

My fishing buddy David mingy and I set off in our kayaks from the Baxter Conservation area with the other 35 competitors. To ensure I didn’t deviate into the boating channel, we attached a bear bell to the tip of one of Dave’s rods mounted in a rear rod holder, and a second small brass bell suspended just off the stern using a wire coat hanger and some duct tape. Unfortunately, the bear bell fell off somewhere between the staging area and the shore from where we launched, and in spite of my bending the coat hanger in every possible configuration, we just couldn’t get that small bell to ring in any sort of consistent manner without Dave having to perform the shimmy while seated in his kayak.

Navigating by talking compass on a river isn’t feasible due to the river’s numerous turns and twists. However, there are lots of sounds along the Rideau River for me to focus on as navigational aids. Whether it was cottage owners tending their lawns, birds in trees, or cars passing along nearby roads or overhead on bridges, there were plenty of audible clues to keep me well oriented. Of course, I took GPS coordinates at the start point just in case I had to return solo. Otherwise, I simply listened for the splash of Dave’s paddle, a system that works well given that my kayak is virtually soundless thanks to my Mirage Drive peddle system from HobieCat. 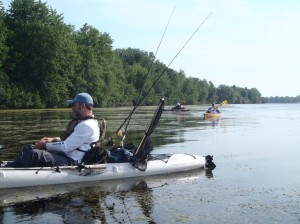 It wasn’t long before we got into some nice largemouth Bass chucking craws along weed edges. My biggest for the day was 17.5 inches, and my largest Walleye, also caught on a Texas-rigged craw, was 16 inches. Neither fish were big enough to win me a prize, but I came close. 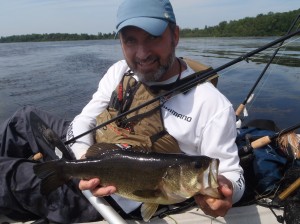 By noon the recreational boat traffic on the river had grown fairly intense. When motor boats were travelling in my direction it wasn’t always easy to determine which side of me they would pass – often sounding like they were heading directly for me. After a boat had passed, the sound of its fading motor for the next five minutes or so provided an excellent audio indicator to either follow or use in maintaining orientation. Of course, there was also Dave’s yelling when I headed off in a direction that he judged as less than prudent.

Half the fun of an event such as this is the story telling and catching up with old friends at the end, and even on the water. Kayaks don’t pass each other at blazing speeds, and given that we were all travelling along the edge of the boating channel, one couldn’t help but stop and chat with fellow competitors. A truly social day with some great fishing and exercise thrown in for good measure.