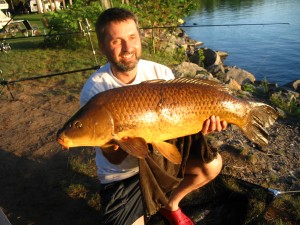 A friend who recently regained his sight after a lifetime of being blind said sight can be quite perplexing.  Seeing an object for the first time offers few clues about its nature, making touching, smelling and tasting crucial to gaining understanding.  All intelligent life forms utilize all their senses to explore their world.  The difference between us and fish is that we have hands for grasping and touching, whereas fish have only their mouths.

Fish have no concept of “artificial”, and survive by sorting their environment according to what tastes and feels good, and what doesn’t.  Other than those few weeks each year when spawning becomes central in their lives, the rest of the time is spent refining their foraging skills.

Beach goers who are victims of shark attacks are often unaware that an “attack” took place until they look down and notice that their leg is bleeding.  Most report feeling only a slight bump.  It’s not that the shark wasn’t able to actually bite off a peace of leg, but simply wanted to have a taste.  The reason these beach goers still have their legs is because it’s a taste that sharks aren’t conditioned to associate with food.  That’s not to say that there isn’t a handful of shark species out of the over 500 varieties that wouldn’t hesitate triggering a feeding frenzy involving humans, such as Bull Sharks — responsible for eating more downed pilots during the second world war than all other species combined.

While the degree to which different species of fish rely on their sense of taste is determined primarily by their preferred style of foraging, the importance an individual fish places on a specific sense has also to do with their attitude at the time.  Aggressive or feeding fish are often competing with other fish and have less time to exercise caution, and while curious fish might explore their world utilizing all their senses, neutral or negative feeling fish will rely more on their longer range senses such as hearing, feeling and sight, before moving in closer to smell, touch and taste.

Eyes situated on the sides of heads of Catfish and Carp offer little foraging assistance.  The more such species dwell in low-light environments the more they depend on taste, which in turn has led to their evolving increasingly more  taste sensors.  Taste buds are not only located inside a fish’s mouth, but often on the sides of their faces, gills and  fins, and in the case of Carp  and Catfish, along their barbels (whiskers) and the sides of their bodies.  Surprisingly though, fish have no taste buds on their tongues.

Fish survive through to adulthood by depending on their inherited instincts, and thrive by conditioning their behaviours through repeated negative and positive experiences.  If a fish learns to associate a certain shape and colour of artificial bait with having their butts kicked, then adding a bit of scent isn’t going to change their mind.  However, trying a different shape, colour or presentation style just might.

While Bass too use their sense of taste to sort out their world into edible and non-edible, they depend more on their hearing and sight.  Using reaction baits to catch Bass doesn’t involve taste at all.  From the time a Bass strikes until it’s hooked is often miniscule, which means Bass have little chance to reject reaction baits for reasons of taste, smell and touch.

Taste becomes more relevant when fishing for Bass using slower moving baits such as plastics.  Senkos were never designed to mimic exactly what Bass normally eat.  Bass find their shape intriguing though, which leads to their taking the next step and striking.  Once in the Bass’s mouth, Senkos feel life-like, and as long as they don’t taste or smell inedible, it doesn’t take long before their down the hatch.

Adding scent to plastics can assist in triggering neutral or negative feeling fish to strike, and can serve to mask unnatural scents such as tobacco, sun block, insect repellent or hand sanitizer.  If you’re careful how you store and handle your soft plastics however, the use of fish attractants on plastics for aggressive predators such as Bass, Musky or Pike is more of an option then a necessity.

No doubt, the priority placed on specific senses by a fish will depend on a variety of factors such as foraging style, water clarity and temperature, light levels, competitive pressure, the presents of known or unknown threats, spawning instincts, reaction time, etc.  Thus, the odds of your bait passing the different sensory tests applied by aggressive, feeding, curious or neutral fish will improve by thinking of your bait as a complete package.