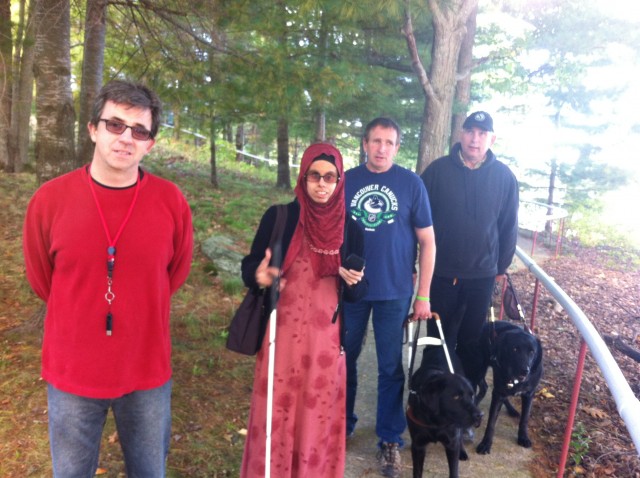 Somehow it got into my head that organizing a treasure hunt using talking GPS technology for a bunch of blind people might be fun.  Normally, thoughts like this generally pass before I have the chance to verbalize them aloud which, this time, wasn’t the case.  The next thing I knew I was organizing what could possibly be the world’s first blind GPS treasure hunt.

Location for the treasure hunt was the CNIB Lake Joseph Centre. A 61-year old facility recently rebuilt to the tune of $7 million.  The Centre is located just south of Perry Sound Ontario, and sprawls out over 13 acres of Canadian Shield including the nicest beach on Lake Joseph.

The technology of choice was five of HumanWare’s Trekker Breeze handheld talking GPS units.  Participants included 25 blind and low vision adults gathered at the CNIB LJC facility to take part in a week of technology training.  The only thing missing was a plan. 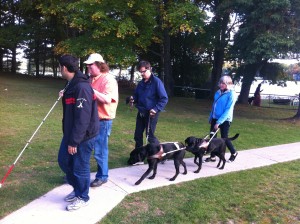 I started by scouting out the grounds of the Lake Joseph Centre and quickly settled on braille signage as the objects of the search.  All the signs I chose could be reached without having to leave any of the numerous paved pathways that loop in and around the facility.  I then fired up six Trekker Breeze units and recorded landmarks while standing next to each sign.  A unique number was assigned to each landmark, and repeated on each Trekker Breeze.

The rules of the hunt were as follows.  Each team was randomly assembled.  Team leads received five minutes of instruction on the use of the Breeze over lunch, but were not given the opportunity to try out the technology.  Teams were told not to leave the paths, but were permitted to determine in what order landmarks would be searched. Winners would be chosen by the team who made it back to the rallying point first with the correct names of the selected landmarks. 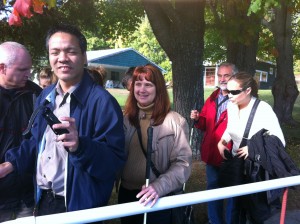 The five teams started at the same time making things even more interesting as each team attempted to sort out their course headings while at the same time avoid entanglements with the other teams all sharing the same path.  Since there were no street maps for the Trekker Breezes to use for offering direction, the coordinates of the chosen landmarks were communicated by both articulating the distance to the selected landmark in feet, and the recommended direction  to take using the clock, (e.g. 192 feet, 2 o’clock).

Each time a team located a landmark they would then select a new heading and receive directions, “by the crow flies”. This meant the recommended direction was given according to a direct line between where the team stood and where they needed to go.  Since the teams weren’t allowed to leave the paths, triangulation was used to pin-point the location of each landmark.

To my surprise, the first team finished within 40 minutes, and each of the other four teams within another ten.  All teams experienced little difficulty using the technology, and each team found all four landmarks.  Even more interesting was the fact that few of the participants had explored the paths used during the hunt prior to the event, but still managed to stay oriented within the boundaries set out by the locations of the selected landmarks.

The only tip I gave the teams prior to starting the hunt was to move steadily in a straight direction so the GPS units could calculate their direction based on sequential satellite readings.  Unlike compasses, GPS units do not know which way the user is heading until several readings can be obtained that are further apart than the standard error of margin for GPS, which is about ten feet.  Those teams that stopped or changed direction too often, or who walked too slowly or frequently paused, received confusing feedback.  However, it didn’t take the teams long to figure out that steady forward movement was the key.

The fact that all the teams managed to successfully finish the hunt within ten minutes of each other says to me that the technology works as intended. The strong interest participants expressed in taking part in the event is also worth noting since almost none had previous experience using accessible GPS technology.

Upon reflection, I wonder if navigating by the crow flies is something that perhaps developers of GPS devices for the blind may have undervalued?  Currently, most GPs systems for the blind focus their way finding on establishing specific routes based on street maps.  Personally, I often find this type of navigational assistance to be somewhat rigid in terms of limiting my options, and prefer to choose the streets I travel to reach my intended destination.  The fact that the treasure hunt participants enjoyed the experience means I’m probably not the only one who appreciates the freedom of choosing my routes while using GPS to find a “new-to-me”  destination. 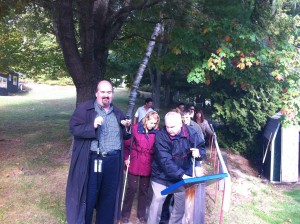 A big thanks to HumanWare for lending me the Trekker Breeze systems, and to the staff at the CNIB Lake Joseph Centre for assisting with the execution of the event.