As my wife, two youngest, our two pups, and I were well into the second week of our 9-week 16,000 km tour of the western portion of the United States and Canada, there was no way we could drive by Denver Colorado without paying a visit to my good friend Lance Glaser. I first met Lance while co-organizing a fishing event with him in Miami for the No Barriers Summit. We took over 60 people with disabilities fishing, and then Lance arranged to take me out after the Summit concluded for a day of Tuna and Shark fishing. Our paths next crossed when Lance organized a team of competitive fly fishers with disabilities to take part in the America Cup International Fly Fishing Tournament. Five days of intensive perfect fly fishing adventure. This time my family and I were to be guests of Lance and his wife Pat at their home in Brekenridge. We got there just in time for the July 4th celebrations.

One of the first activities Lance had us participate in was a Trout Unlimited sponsored kids fishing derby. My two youngest and I spent a half day trying to tease newly stocked Trout from a large pond along with 70 other kids. My son won a Trout Unlimited cap for his efforts, and my daughter a box of artificial flies. Later that night Lance was hard at work tying up articulating streamers for a surprise he had in mind for me, but his session at the vice quickly turned into fly tying lessons for the kids. They were absolutely amazed by the endless variety of Lance’s fly tying materials, and how he was able to craft both large and tiny creations on hooks. In spite of all the questions, Lance still managed to put some articulated streamers together for our use the next day.

The next morning we went around and picked up a local fly fishing guide and good friend of Lance’s, Shari Topping from Cutthroat Anglers. I had the pleasure of meeting Shari during the America Cup. Shari agreed to join us for a day of fly fishing on a private ranch.

Lance is friends with the owners of this 3,500 acre ranch and has received permission to host fly fishing sessions on the property that involve people with disabilities. Today I would be the only such guest, being completely without sight myself. It’s not uncommon for Lance to organize days on the ranch with as many as 40 Wounded warriors at a time.

My goal was to catch a giant Rainbow, Cutbow or Brown on a streamer using a sinking tip fly line and a six weight fly rod. The only assistance I wanted in realizing this goal was direction on where to stand and cast, and a hand with the netting. For me, streamers or nymphs represent the most likely techniques for fly fishing independently. Dry flies and indicators all require sighted assistance to alert me to the take. I wanted to catch trout using my sense of touch alone. Lance had a slight variation in mind.

Lance already knew I could catch fish. He also witnessed me catch quite a number of decent trout in the past. What he had in mind this time was the capture of a true giant. Something weighing over 20 pounds. Sure, I said, bring it on, all the time thinking why does he always have to complicate things? But, fishing with Lance is always an adventure, and I knew if anyone could pull it off it was him.

I don’t know how many pools and ponds brimming with decent trout we passed by before finally arriving at a spot Lance had in mind. It involved a small point next to strong current. The goal was to work the streamer around the point where the current broke. The trick was that it involved a 50-foot cast next to heavy brush. On my third try I managed to get the streamer into Position to Lance’s satisfaction. I just started working the streamer over the point when the line stopped dead. I set the hook and the fight was on. 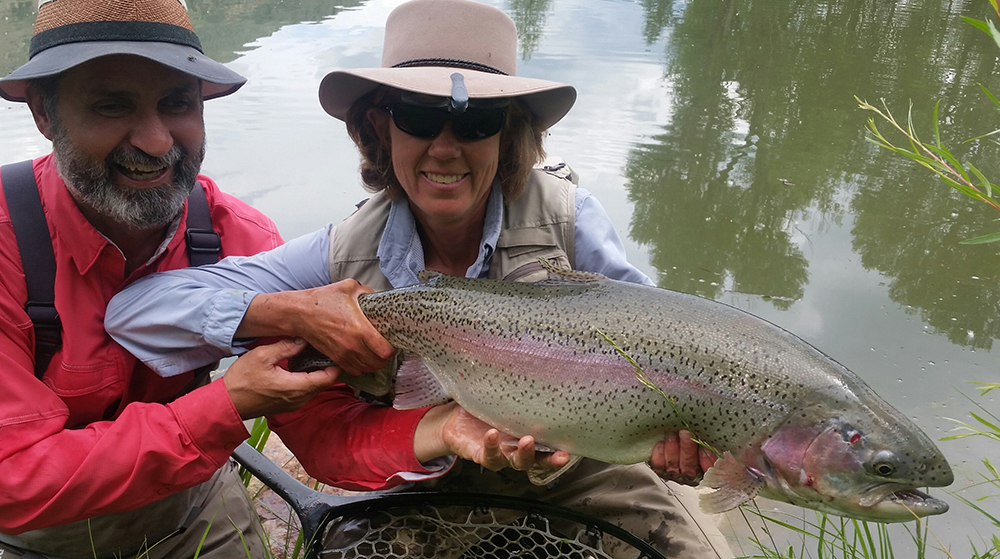 The trout I had hooked was a long silver Rainbow that was doing everything it could to put current between itself and me. Amazingly enough, I managed to turn it every time it came close to leaving the pool. By no means did I tire the fish before Shari managed to get it into the net. The fight could have lasted a lot longer, but the goal is to release the fish alive and not to explode their hearts. I have to hand it to Shari for doing such a great job with the net. Unfortunately, when I went to join Shari in the water to hold the fish for a photo, the fish was way more than I expected and leaped from my hands before Lance was able to snap a pick. He and Shari estimated the fish to be close to 25 pounds. It was like holding a torpedo. I was in shock, but quickly managed to snap out of my dismay.

We then marched past numerous other holes and pools stopping only briefly to fish very specific sections, all while ignoring the numerous other fish that never measured up to Lance’s expectations.

Finally, we stopped at a pool that had a large log as a feature. My job was to bring the streamer alongside the log within six inches. It meant a 40-foot cast into the current up-stream and timing my retrieve so the fly would come along the downstream side of the log that lied perpendicular to the current. On my fourth cast I made contact with the brute that called the log home. It was the alpha fish in the pool and occupied the most desirable lie. And, it was huge.

The first thing this trout did was leap over the log, I thought for sure the fight would be over, but nope, the fish swam up-stream before turning after about 75 feet and then coming back downstream along the opposite shore. I then had to turn it, again, bring it back across the river, and into the quiet pool behind the log to be netted. The trout was having none of it however and doggedly stayed out in the main current, but to my luck, never going too far in either direction before turning each time.

This one Shari also netted after I backed up the bank. Being a bit more prepared, and Shari assisting with the lift, Lance got the photo. This fish wasn’t nearly as silver as the first fish, but was incredibly deep in the belly. It too weighed over 20 pounds. I had never held such a large deep-bellied trout in my entire life.

We caught other fish that day. Lance and Shari would set me up on a pool and then move left and right so we could all fish in sight of one another. I’m pretty certain I was able to master the art of working large #4 streamers on sinking tip line in fast current. What a day in deed made possible with the friendship and commitment of two great friends.