You often hear rumours about anglers who go fishing in spring and catch a hundred Crappy. The first thing we all ask, is where? Early ice-out conditions can be like fishing through the ice. The fish seem to be no where until finally you find them, and then they are in numbers that boggle the mind. Go back two weeks later, and it’s a totally different story. So why are Crappy so hard to find, and what explains their split personality?

Getting the boat out of storage or wetting a new boat for the first time is an exciting start to any angler’s year. Taking the boat for a shake-down cruise in April goes hand-in-hand with searching for spring Crappy. It’s a good fit because finding crappy can take a lot of running about. No doubt, lot’s has been said and written on where to look, but in the end, it comes down to a process of elimination. Once you find them though, its knowledge for life – they seem to be creatures of habit. It’s why everyone is so tight lipped about where to look. 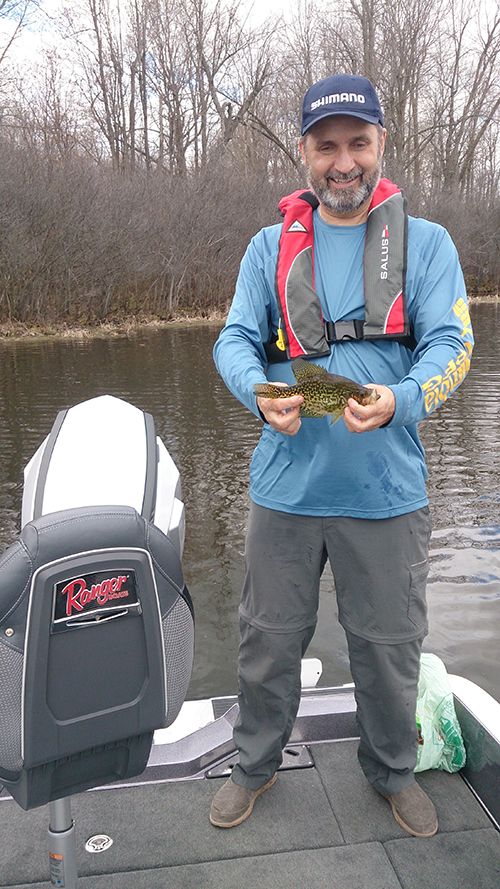 Northern shorelines in the backs of bays over bottom that is black, or at the mouths of in-flowing streams or rivers are features that are often identified as places to look. Of course, timing is another important factor as nothing turns Crappy on more than direct sun, and the lack of sun can just as quickly shut these little big-mouths down. The problem seems to arise when so many of the seemingly likely spots don’t seem to hold fish. It’s often just the one spot, but which one.

Water temperatures between 40 and 50 F could be considered pre-spawn. Crappy, like most all fish, are still experiencing a slow metabolism and have minimal appetites. They will bite, but prefer slow moving or stationary meals of smaller proportions. Float fishing is the answer because fish need to study their meal first, and they are probably in fairly shallow water. This is also the time of year that Crappy are taking the bite while moving up in the water column, which means the line grows slack when they bite, and doesn’t jerk or tighten. Round bobbers hardly move, but a stick bobber might tip over on to its side. Personally, I use the smallest float that will suspend my bait, cast out, and then reel in as slow as possible, setting the hook when tension is detected.

Later, when water temps warm up to between 55 and 70, Crappy come alive. They become just as difficult to find, but more aggressive when you do. Small 1/16 oz. jigs with 2” to 3” tubes or grubs work well, as do tiny spinners or jigs rigged with blades. A cast and retrieve is all that’s needed. Northern Pike might also be feeding post-spawn, so Crappy will be using cover like wood in the water or early growth weeds to avoid being eaten. Prepare to be bitten off.

A third technique that works on less than cooperative Crappy is a mini drop shot rig. I personally use 4lb braded Power Pro line, a tiny 6mm swivel, and 3-feet of 4lb floral line as a leader. A #6 extra wide gap hook from EagleClaw and a 1/16 oz. tungsten weight from Ultra Tungsten completes the rig. Fish the line a bit slack, and take your time setting the hook. Setting the hook after solid resistance is detected is sufficient and will avoid needlessly pulling the bait out of strike range before the Crappy has properly engulfed the bait.

Last, I never make it a point to count the number of fish caught. I don’t want to fall into that numbers game, and would rather catch some, enjoy the bite for a while, and then get back to cruising the lake to look for more areas where the Crappy are holding up. I always pinch the barb on my hooks as Crappy have paper-thin mouths and there’s no point tearing them a new hole every time I catch and release a fish. If I intend to keep a few for dinner that night, I release the biggest ones, thinking these are the primary breeding females, and keep just enough of the average size males to feed the family.

So, slow fish fast fish, it really comes down to the water temperature in the end. It has nothing to do with their astrological sign. Same fish, totally different experience. Try them both ways and enjoy your first days out on the boat in the new year.