For decades I’ve been feeling my way along river and lake bottoms using only my hook, line and rod as a sensor.  I’m always imagining what it might look like below my boat, but until recently, that’s all I could do.  Now that I’m a certified C-level SCUBA diver I can actually get down there and feel for myself.

Last fall my good friend Doug Laurie-Lean and I began training with the “Freedom at Depth Canada” SCUBA program headed up by Hubert Chretien.  Huby trains people with disabilities to become certified in SCUBA, and after countless hours sitting at his kitchen table studying and in his pool practicing, we made our first five dives. 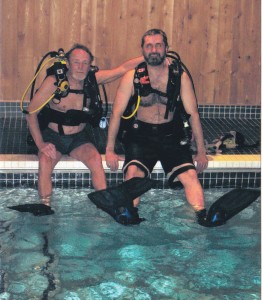 Doug and Lawrence by the pool

I understand that for folks with physical disabilities SCUBA represents the opportunity to experience true freedom in movement.  For folks like me who have no sight, it’s a completely different experience.  Not only am I without sight, but underwater, other than the sound of my own bubbles, I lose my sense of hearing as well.  Add to this a complete loss of orientation that occurs the moment contact with the surface is lost and lasts until contact with the bottom has been established.  As someone without sight, SCUBA provides a complete suspension of time and reality, and there’s more.

My gear consists of a 7mm neoprene wet suit, gloves, boots and fins, hood and mask, buoyancy control device, a tank of compressed air, regulator, and 20lb of lead.  I was literally covered from head to toe, and thanks to the innovative arm and leg cuff system designed by Henderson Sports on their new Aqua Lock wet suits, I remained almost totally dry.

Each of my first three dives on day one were to a depth of about 30 feet.  We were diving the St. Lawrence River along side ocean-going cargo vessels and the numerous cigarette style speed boats taking part in the Kingston poker run.  Regardless, once under the waves all that noise and disturbance was left far behind.  The river’s bottom, on the other hand, offered up a wide variety of both man-made and natural attractions to explore.  There was also junk, which frankly left me ashamed to be part of the land dwellers who think nothing of tossing waste into the river.

Everyone should experience directly just how obvious trash becomes on the river bottom.  For the most part, the river bed is barren and flat once your down over 25 feet, resulting in anything larger than an egg being more than obvious.  It did however, make me re-think the importance structure is to fish.

I detected countless Zebra Muscles on just about every hard surface, and fresh water clams on the more prevalent siltier areas of the bottom.  At about 25 feet the grass started, and by 15 feet algae blooms were flourishing.  And then there were the Round Gobies, which covered the bottom at all depths.

The first three dives included demonstrating the different skills I learned over the winter.  From mask and regulator recovery to buddy breathing, we did it all with the exception of three skills Huby was saving for day two.

Our second day of diving had us at an expired rock quarry which had long since filled with water.  We had two dives left and both would take me to a depth of 60 feet.  I know how tall my 3-story house is, having renovated it inside and out over the past dozen years, and 60 feet is twice its height.  The comparison didn’t help calm my nerves at all. 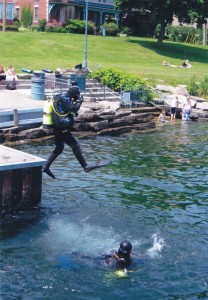 Day two also turned out to be the hottest June 20th on record for our area, with temperatures in the “feel like” range of 44 degrees C.  It wasn’t fun standing around in the heat encased in 7 mm of black rubber.  Thankfully, Huby tried hard to limit our on-deck time, but we still cooked like steamed lobsters.

The water temperature was a different story.  The first 25 feet down was refreshingly cool.  The next 35 feet was just plane cold.  Thankfully, my wetsuit was more than up to the challenge, and the only part of me that really felt the cold were my lips.  Turns out numb lips aren’t the greatest for holding on to a regulator, and on more than one occasion I had to concentrate on clamping down to avoid my regulator from being knocked from my mouth by Huby’s elbow.  (Huby and I travel underwater by his leading me by grasping my forearm. 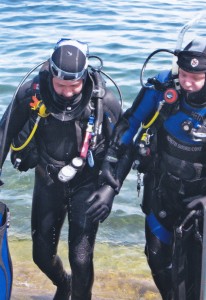 The quarry delivered up quite a number of surprises.  First there was a 2-man submarine wresting on the bottom at 60 feet.  The craft measured about 25 feet in length and around 4-feet in diameter.  The second surprise was an old tug boat at 50 feet.  The hull was still in excellent condition.  The third wreck was a twin engine aircraft resting at about 30 feet.  Of course, having no means of communicating underwater except for the hand-on-hand system Huby uses to convey depth, air pressure and remaining dive time, it was up to me to figure out what all these foreign objects represented using touch.     Diving around wrecks had to be performed slowly as I was to learn all too well when my forward momentum suddenly halted due to my tank running up against a horizontal rudder connected to the sub’s conning tower.  Huby advises that one always begin with a preliminary swim around the wreck to assess its general condition prior to conducting a more detailed examination.  My 7mm neoprene gloves and the metal being somewhat older and slightly eroded made it safe for me to run my hands along all the different surfaces.  I have to admit the idea of diving on fresh wrecks to recover victims did cross my mind, causing me to wonder what it would be like to participate in an emergency recovery dive using just my hands.

On several occasions I lost contact with the wreck I was exploring and quickly became disoriented.  Being without sight means I’m not only unable to know where my dive partner is, but whether I’m sinking or rising and at what speed.  Without something to follow during descents and ascents, like an anchor rope, I have no way of judging the speed at which my depth is changing other than by the pressure in my ears.  Descending and ascending at no more than one foot per second is the general rule.  Any faster and one runs the risk of permanent impairment or death caused from sudden and significant pressure change.

Even knowing which way is up isn’t always obvious.  Swimming down increases the pressure in my ears, but then again, it feels the same as when swimming up.  Two tactile indicators allow me to judge my body position in relation to the earth’s gravitational pull.  The first is the direction bubbles are travelling as they leave my regulator – passing by my face means my face is pointed down.  The second is the weight of the lead weights in the front pockets of my BCD (buoyancy Control Device).  With my body horizontal and oriented down, the weights are pulling on my BCD.  With my body facing up, the weights are pressing down on my mid section.  The air tank itself offers no actual clue, which seems crazy since it’s full of air.  However, a full tank provides 4lb of buoyancy under water, and a near empty tank generates about 2lbs of weight.

Skills demonstrated during the two quarry dives included mask recovery, swimming ascent without a mask, and an emergency swimming ascent.  Taking off the mask down deep in that cold quarry water was anything but fun – similar to what bobbing for beers in an ice-filled cooler must feel like.

Dive five ended with my following the quarry wall where it met the bottom.  I was so focussed on the task it came as quite a shock when I finally ran out of water.  My first thought was that I had swam into some sort of thick soup.  My forward progress halted and everything grew heavy.  It was only after hearing the beach goers that it dawned on me that I had emerged.  My next thought was a realization of what fish must experience when they leap clear of the water.  Weightlessness and freedom of movement are suddenly things of the past, and one’s body feels so much heavier. Fish must find being out of the water their own personal hell.  Makes one wonder why early life forms crawled out from the oceans in the first place.

This is one land-lover that will be crawling his way back into the depths.  My goal is to develop a deeper understanding of the types of habitat fish associate with.  It’s already affected my fishing.  I am now covering water using larger dissections and spending less time in any one location.  I’m pretty sure that when down over 20 feet, any fish within ten feet of my bait knows it’s there.

I’ll never dive on a coral reef as touching coral can cause it to die and is generally regarded as a “no-no”.  Diving on wrecks is also not my goal as touching submerged ships and such doesn’t give me the same “wow” factor it does to divers who have sight.

I have heard of blind divers employed to use under-water suction equipment to empty hulls of ancient submerged ships where visibility is zero – making it impossible for divers dependent on sight to function.  I also once met a blind Swedish diver employed twice yearly to swim up a 3km 1.5-meter diameter intake pipe holding a camera in one hand and a spotlight in the other – a task sighted divers also refused.  Not being a big fan of confined spaces myself, having spent considerable time in Cape Breton coal mines with sealing heights of 4-dfeet and less, I’ll stick to exploring fish habitat.

It doesn’t bother me that I can’t see the actual fish underwater since I do this often enough aboard my boat fishing.  I simply want to gain a stronger appreciation of their environment and how we are impacting their lives.  My goal is to secure several underwater two-way radios so I can communicate with my dive buddy as we explore fish habitat.

As far as my complete state of dependency when diving at significant depths, I’ll just have to keep the faith and hope my dive buddy is reliable.  Fortunately, as a class “C” diver, I’ll always dive with two other divers, which is important since someone needs to be there to assist my buddy should he or she get into trouble.  And should trouble strike, a third person reduces my chance of having no safe means of regaining the surface.