I recently returned from spending five days at the CNIB Lake Joseph Centre where I volunteered as a coach. The week is organized specificly for blind youth, and what a week it was.

Three groups of blind youth between the ages of 8 and 18 participated, numbering over 40 in total. My job was to head up the fishing component, and help out where needed. Turned out I was needed a lot.

I started day one by helping Terry and Anne Kelly with coaching five youth on various aspects of triathalon participation. Terry and I met at Lake Joe in 2010 while participating in a half-triathalon, and with Annes fitness training background , we had things pretty much under control. Not so at the beach where the swimming program was being run.

Not long into day one I was asked to help out with a 13-year old youth who was unwilling to entre the lake. After several minutes of discussion between the youth and myself, we agreed that we would go in together – actually, I carried him (LOL). Poor kid never had a pinch of fat on him, and with the summer having been delayed due to numerous rain storms, the water wasnn’t exactly warm. The next day I gave him a piggy back ride in. Turned out he was a seasoned swimmer, making it difficult for even me to keep up.

The paddling program was being headed up by Victoria Numan, Canada’s gold Paralympic atholete and world record holder in the 4-person rowing event. Youth paddled everything from canoes and kayaks, to stand-up boards.

The team leading the sailing component included Dave Brown of Blind Sailing Canada. Dave brought up several of his club’s audible markers which made for some exciting races on the final day. 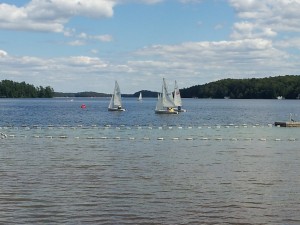 photo of the sailboats going around the audible markers

Fishing took place each afternoon either aboard Lake Joe’s new dedicated fishing boat donated by Brunswick Marine, for those youth who were blind, or off the fishing peer, for those youth who could see well enough to watch a bobber. Needless-to-say, the boat was by far the more popular option. The feel of it’s cutting through waves and the wind in one’s face made for an exciting ride. Comfortable seating and excellent boat handling also meant verticle fishing over known fish-holding areas made for some pleasurable yet intense action. Each youth caught at least six fish.

Camp Ability for blind youth is the brain child of Dr. Monica Lepore, , a professor in Adapted Physical Education (www.campabilitiespa.org). Dr. Lepore, or more effectionately known as “Doc”, has an amazing ability to see inside each youth, and at the same time she’s profoundly empathizing with each and every youth in the program, she’s also instilling in them a desire to push themselves harder physically than they have ever been pushed before. The results are truly inspiring. It doesn’t stop there though, doc makes sure each youth is supported to continue to expand their newly found fisical skills after returning home. And there’s more. Her keen perception also focussed on each of the coaches. At the closing session Dr. Lepore had a truly insightful presentation that went along with her thanking each volunteer in person.

If you think childhood obesedy is an issue, just imagine what it means to youth who are blind. I’ve often heard blind people remark that so much concern over their fisical safety leads to their being hot-housed like greenhouse tomatoes. Programs like Dr. Lepore’s blow these attitudes away, thank goodness.

And if you think I got off without working up a sweat myself, you’re wrong. The U.S. coaches challenged the Canadian coaches to a push-up contest. The top five from each group would compete to see who could do the most. Well, not without effort on our side, the U.S. team won the event thanks in large part to their anchor who knocked out just over 80 (turns out he holds several weight lifting records).

Photo of Lawrence and his peers doing the push up competition