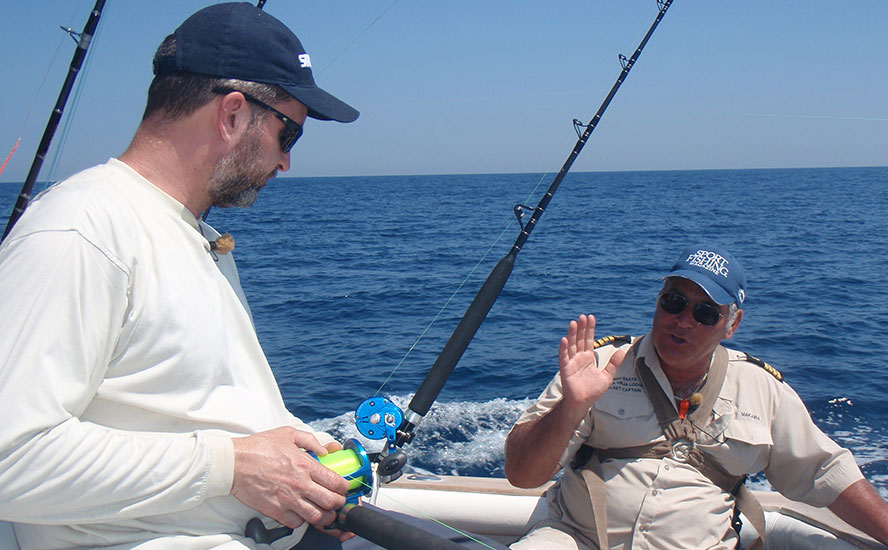 I first crossed paths with Tred Barta in Colorado where we teamed up to compete in the American International Fly Fishing Cup. I had the chance to witness Tred catch five-pound plus rainbows on a one-weight fly rod. Tred told me later he knew I was good for a challenge when I insisted on trying his infamous 150lb long bow. Personally, I think Tred just wanted to get back at me after my guide dog stole his sandwich.

I next heard from Tred when he contacted me with an invitation to film an episode of his TV show. The challenge was to catch Sailfish on light line using the bait-and-switch technique, something most people would think would be impossible to do by an angler without sight. I would be Tred’s hands and arms, and Tred would be my eyes.

Never being one to turn down a challenge, I accepted. Tred was curious whether my claim to be able to catch any fish using my sense of touch alone would hold true. Being blind since age eight and a professional fisher, it never crossed my mind that I may have bitten off more than I could chew. 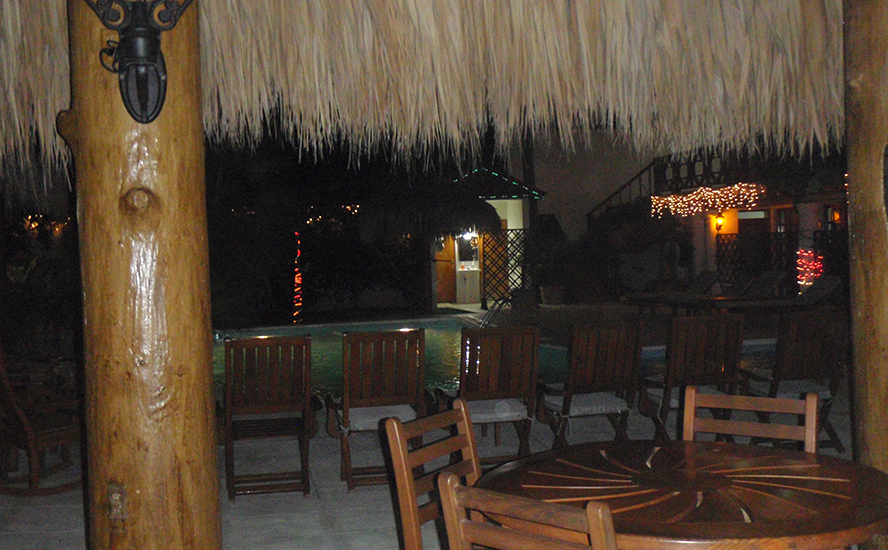 Six months later my guide dog and I caught up with Tred in Miami, where we set off for Guatemala. On arriving at the Casa Vieja Lodge I was informed, of course, just how hot the sailfish bite had been two weeks prior. 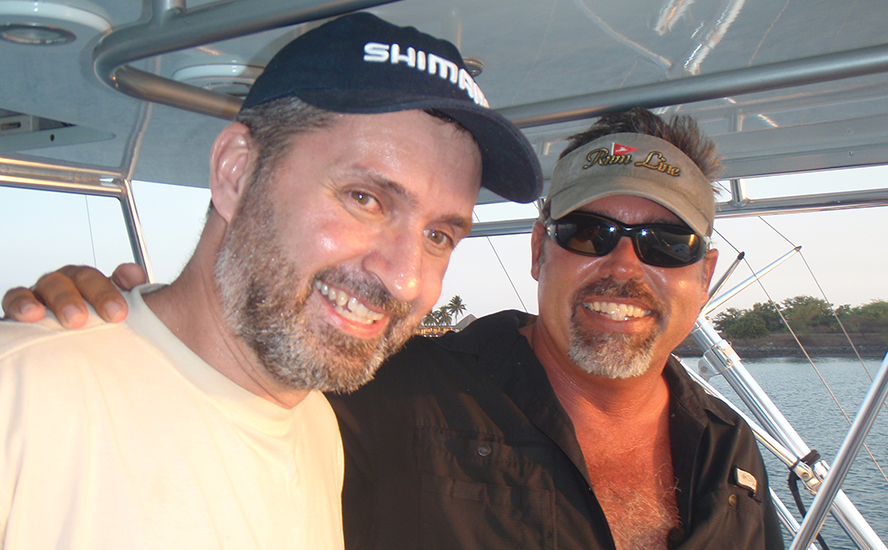 The next morning after stepping aboard a beautifully preserved 40’ Gamefisherman called “Rum Line”, just one of a number of classic sport fishing boats owned by the Lodge at the time, I was assured by our Captain, Chris Sheeder, that such news was relative. Turns out a slow day fishing for billfish in Guatemala means only raising a half dozen or so. However, day one really turned out to be a bust for me with the Sailfish only partially to blame.

In spite of Tred’s well-meaning instructions, I wasn’t able to connect with a single billfish. I had brown sailfish come up and inspect my ballyhoo, I had lit-up sails leap out of the water with my ballyhoo held cross-wise in their mouths, I managed to pull my ballyhoo right out of another sail’s throat that insisted on continuing to follow our boat after taking my bait, and even experienced the heart-break of my line bill-wrapping a sail. However, no matter what Tred said, I just couldn’t get a sailfish to hook up. The only thing I had to show for our combined effort was a nasty friction burn on my thumb. 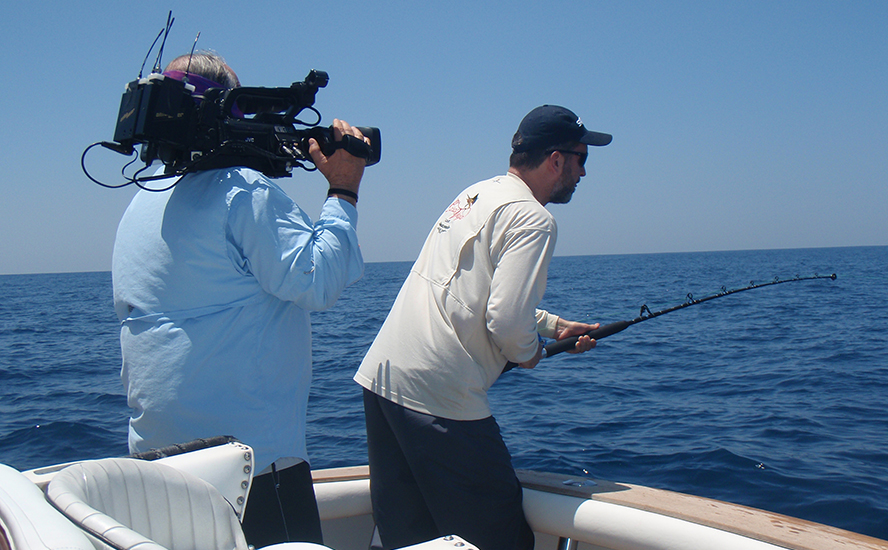 Lawrence ready to pitch in his bait

Here we were, two cameras rolling, burning 150 gallons of diesel a day, a Captain and two mates watching on helplessly, and Tred shouting ever more frantic directions. No wonder that by end of day one, talk was that of abandoning teasers, trolling actual baits on outriggers, mates setting hooks, etc.

Further rubbing salt into my wounded pride was Tred’s incredible capture of a sail using four pound test monofilament line. I since learned Tred actually managed to capture a Sailfish using 2lb mono. He made it look so easy.

Tred, Chris and I were more than a bit perplexed why I just couldn’t get that circle hook planted firmly into the mouths of the sailfish. Sure, I had experienced just about every sort of rotten bite a sailfish can dish out, but missing fish doesn’t make for good TV. In the end, we decided on a compromise. Two ballyhoo on the outside outriggers, two teasers on the inside riggers, a third teaser straight off the stern, and a pitching rod in my hands at the ready. It would mean my spending the day under the sun in the fighting chair, but having just spent the past four months ice fishing, I needed some sun anyway. The other thing we decided was that Chris would direct me from the flying bridge where to place my bait and announce when the sail was closing in, but the rest would be 100% up to me. 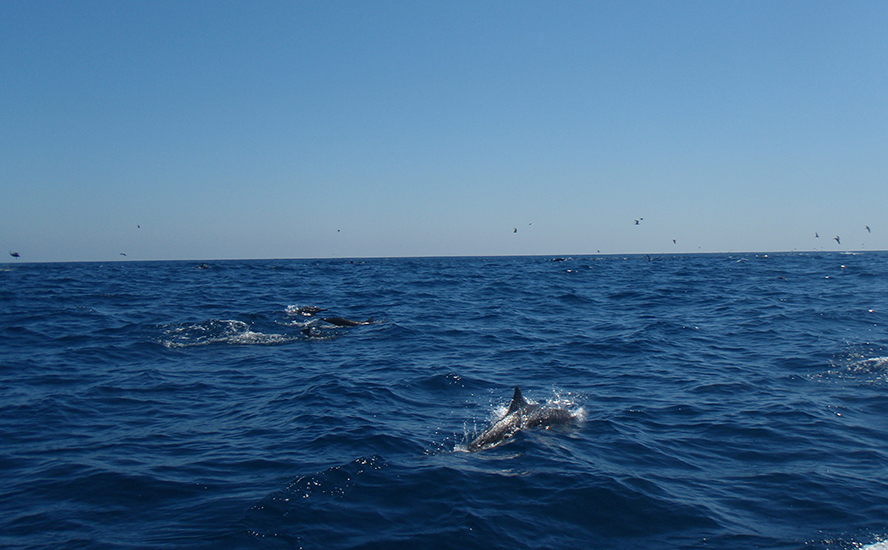 Spinner Dolphins leaping next to the boat

Fast forward to day two, 45 miles out from shore, turtles everywhere, hundreds of leaping Spinner dolphins, thousands of sea birds, and my left outrigger rod goes off. Just an eight pound skip jack, but the situation quickly escalated when a blue marlin took a run at it just off the stern. Within seconds of my getting the skip jack into the boat, the two mates had it impaled on a giant circle hook and back in the water behind the boat. We circled for several minutes, but the Marlin was nowhere to be seen.

I caught more skip jacks on the outriggers before Chris maneuvered the Rum Line away from the roiling mass of sea life. Not long after, the first sailfish of the day made an appearance behind the left teaser.

I quickly pitched in my ballyhoo and dropped it back. Back and back it went. I was beginning to think that Maybe Chris and Tred had got their wires crossed, until I heard Chris say, “hold”. The next few minutes seem to stretch on for hours, and then finally, Chris calmly announced, here it comes”.

Now, back when I was a teenager and still had some peripheral vision, I hunted black bear. It always seemed as if the forest would grow uncommonly quiet just before a bear would make an appearance. All my senses would narrow down to focusing on a large fuzzy black shape about 30 feet away. Being aboard the Rum Line at that moment was somewhat the same, only now I had absolutely no vision left. I focused all my concentration on detecting the bite of the Sailfish using my sense of touch alone. My focus was narrowed to feeling the bait skipping along the surface 40-feet behind the boat, and then there was a tap. Not a monster weight or vicious headshake, but just a delicate tug.

You could have heard a pin drop aboard the Rum Line. I’m sure everyone was holding their breath as they watched this brightly lit up sailfish, mouth wide open, lunging for my bait. I was oblivious to everyone and everything on the boat, and focused exclusively on releasing the pressure of my thumb on the spool of my reel loaded with 8lb mono. My goal was to allow the spool to freely unwind the instant the bait entered the mouth of the Sailfish.

Before anyone could utter a word, my rod was doubled over. Absolute pandemonium ensued as everyone aboard broke out in cheers. 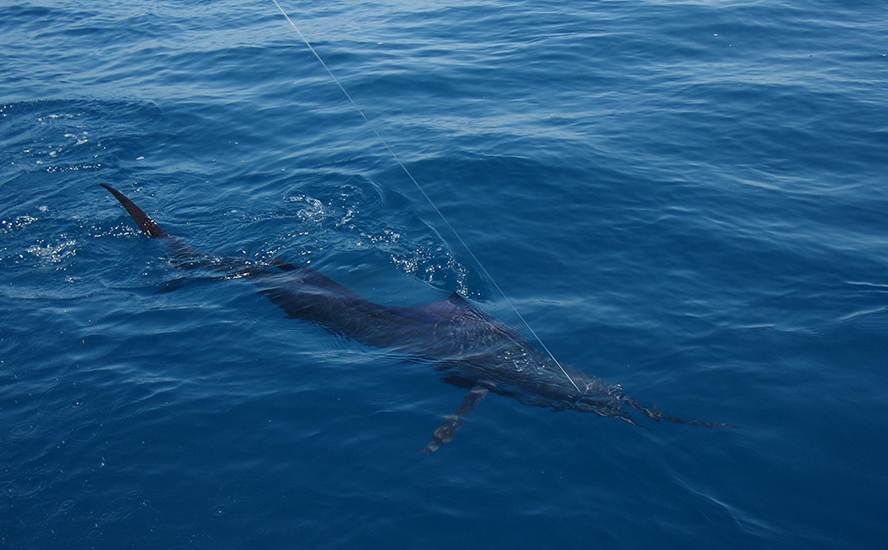 Sailfish at the stern

It finally happened. Our strategy paid off. And not just once, but over and over. I hooked and released eight sails in a row on 16-pound mono using the “bait and switch” method. I even had the honour of hooking up a sail for Annie. 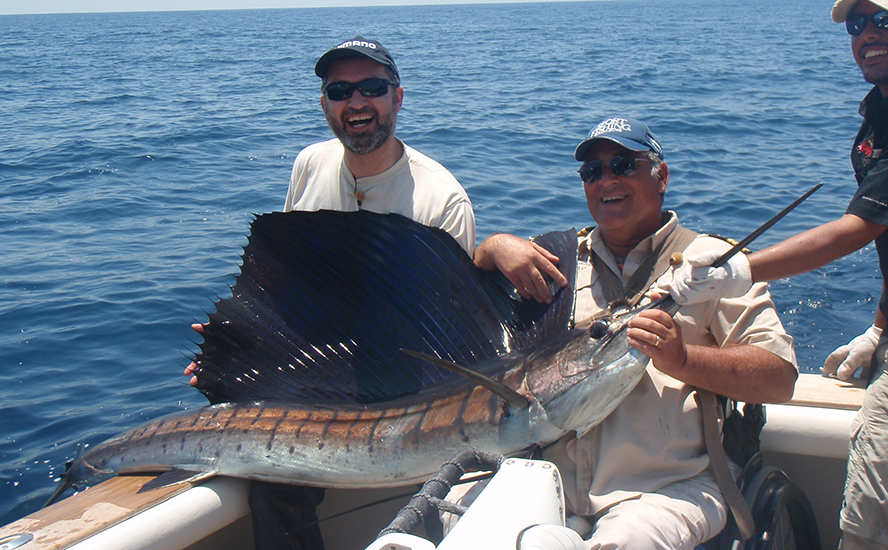 In hind-sight bait and switch fishing is quite simple. Yes, sailfish can attack a bait in several ways, but what they want in the end is to disable their pray, take it in their mouth, and use the pressure of the water to push their meal down their throats. My strategy was to simply let them have it. This meant that even if the sail slashed at my ballyhoo with its bill, I switched to free spool. They were quick to snap up my bait as it passed by their face.

Knowing when a sailfish has turned away from the boat with my bait during free spool was simple. When the sailfish turned away from the boat, the speed of my free spool increased. It was then that I dropped the rod tip, re-engaged the reel’s draft, and began slowly reeling in line to bring the non-off-set circle hook back up the throat of the Sailfish and lodge it firmly in the corner of the fish’s jaw.

Detecting when a sailfish jumped by using my sense of touch was also easy, as underwater, a sailfish will use its sail to make it almost impossible to move. Thus, the difference between solid resistance and my rod tip bouncing was dramatic to say the least.

The sound of the fish breaking free of the water and then re-entering was spectacular. But, nothing compares to the sensation of a sailfish rocketing over the ocean’s surface. 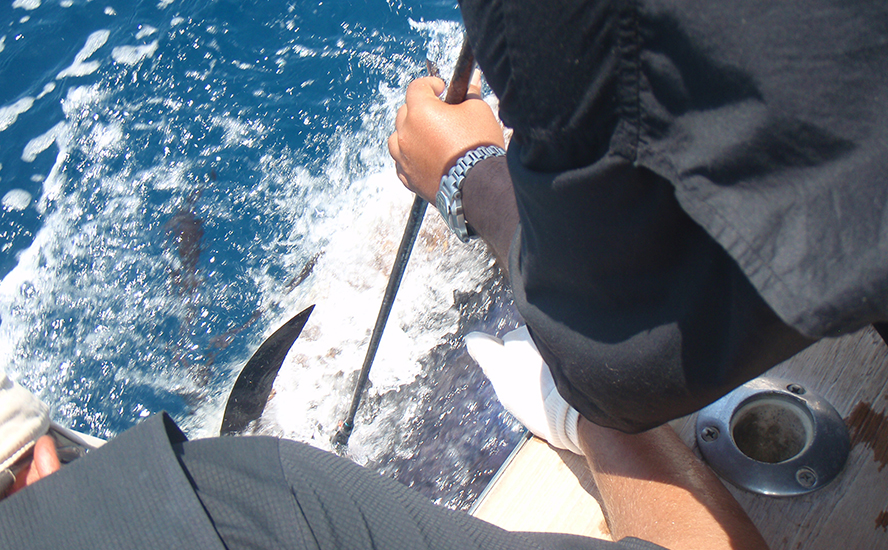 My largest sailfish of the trip tried to leap aboard. It was a beautiful specimen weighing roughly 130 pounds. This sail just wouldn’t stop jumping. It was also one half of a double header, so at one point Chris suggested I slack my drag and we chase down the second fish. It wasn’t long before I was re-engaged in the battle, and it still had plenty of kick. I eventually managed to bring it up to the stern, but too soon as it turned out as the Mate, Ricardo, heroically placed himself between myself and the sail as it attempted to leap aboard. Ricardo clamped the bill of the Sail under his arm, and then grasped the bill in his gloved hand and redirected the fish back over the gunwale.

By the end of the week I had mastered the, “Look away”. This is when you carry on a conversation with your buddy in the boat all the time maintaining eye contact, and only looking away just as your rod bends over with a fish. O.K., maybe I never perfected the “eye contact” part, but for the rest of it, it’s now one of my signature moves. 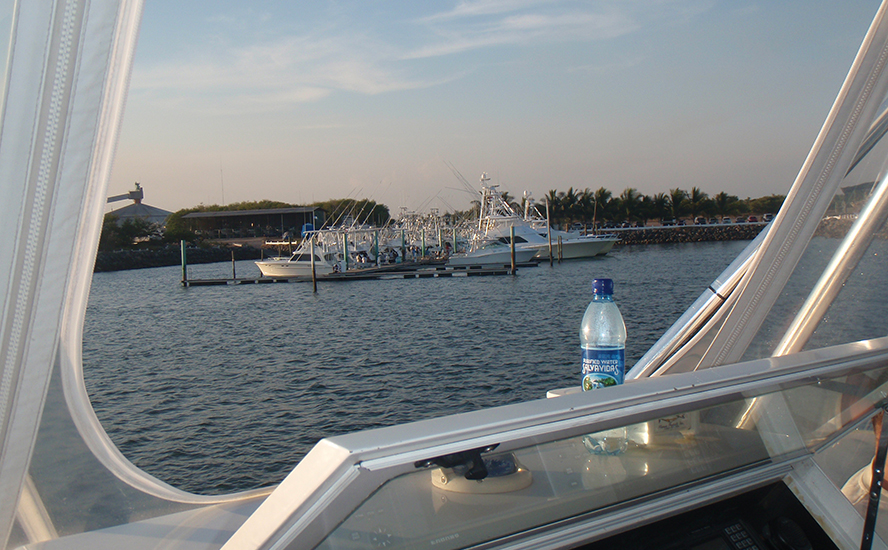 The Guatemalan sport fishing community has contributed significantly to the sustainability of this spectacular fishery. Circle hooks have been fully adopted and a $5,000 fine is levied against any Captain bringing in a dead bill fish. Barring any ecological disaster or on-set of rampant commercial fishing, this fishery shows long-term promise. 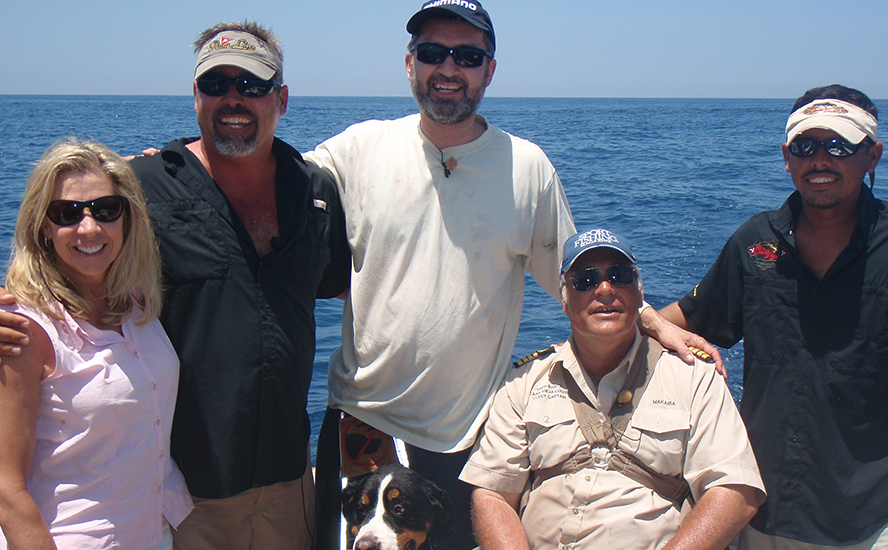 Stepping back to the days of Earnest Hemmingway and taking on these amazing fish was a trip through time I’ll never forget. An all-round incredible voyage in so many ways. I owe it all to Tred, his wonderful wife at the time Annie, the skill of Captain Chris Sheeder and his mates, and to the Turners, owners of Casa Vieja Lodge and their wonderful staff. So long Tred, good fishing my friend.