I attended my first Blind Anglers International Tournament (BAIT) organized by area Lions in 1992 shortly after moving to the Ottawa area. I made a lot of good friends that weekend that I still keep in touch with to this day.

It was in 2007 that I first fished the tournament in my own Blind Fishing Boat (see the article written in Outdoor Canada Magazine ) [http://www.outdoorcanada.ca/fishing-blind]. I’m still the first and only blind angler to have ever competed in the tournament solo.

More recently, I’ve used this opportunity to take other blind anglers fishing such as Miles Hilton-Barber from the U.K. (https://blindfishingboat.com/20th-blind-anglers-international-tournament/) and Dirk Price from Alabama (https://blindfishingboat.com/25th-blind-anglers-international-tournament/). Again, more great life-long friendships forged in a boat.

One of the benefits of being on the Ranger Pro Staff is having a boat that I can safely and comfortably accommodate fellow blind anglers. I don’t drive my Ranger myself as this just wouldn’t be a safe thing to do – never mind what my insurance company would say. Volunteers like Doug Catton, Marco Potvin, Jason Cox and Scott Campbell have generously stepped up to the plate over the years to assume responsibility over the controls of my Ranger 620 Fisherman and 250 HO E-TEC outboard. Together, we have managed to bring in our limit of Pike and Walleye for each of the past five years, and have earned a number of trophies. This year continues the trend.

I’m pleased to report that my guest blind angler for 2016 caught not only three of the fish we brought in, but the largest Pike weighing in at just over 4.5 pounds. His hard work and persistence paid off. I hope the spinner bait I cut from the line he was using at the end of the day to give him will catch many more fish.

A big thanks to the Lions for their hard work and dedication in organizing this event for the past 27 years, and to all those who volunteer to ensure its success.  It’s clear that BAIT has played a significant role in the rehabilitation of numerous newly blind individuals over the years, and has forged many great friendships that are standing the test of time. 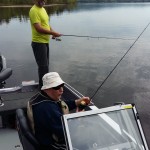 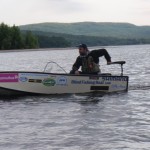 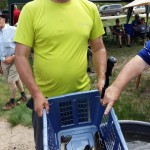 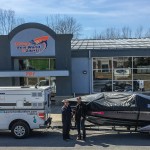