To help make the 25th anniversary of the BAIT tournament special I offered to organize a blind fishing kayak tournament. Unfortunately, the best laid plans of mice and men could not out-do Mother Nature, who’s 50 km/h winds made holding the event impossible. We almost lost the BAIT tournament the next day as well, but after a 1.5 hour delay in loading the boats, things finally calmed down enough to get underway.

35 pro anglers brought their boats this year for one of the largest events ever. My good buddy Scott Campbell stepped up to the plate again and piloted the blind fishing boat with Dirk Price from Alabama and myself aboard. Steve Old, another good friend and blind fishing boat volunteer also brought his boat and helped out over the week-end. 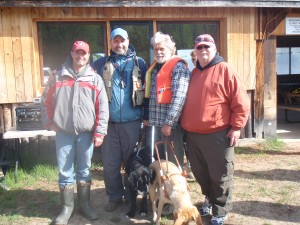 The Ottawa River was three feet higher than normal, with water temperatures in the low 50 Degree range. There were no weeds anywhere.

I suggested we work a stretch of wind-swept shoreline along an inner bay, which ultimately helped us bag the winning Pike for the event. We picked up a beautiful Walleye as well, but it was well over the slot limit for that time of year and we had no choice but to set her free.

As always, the reception put on by the area Lion clubs was well organized and welcoming. Everyone had a great time, and definitely plenty to eat! 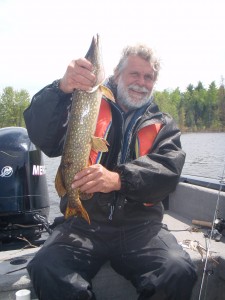 Photo Dirk with his 28 inch pike