Weather for the 24th annual BAIT event seemed promising with a spring that was right on track to deliver up some great fishing.  We weren’t disappointed.  Piloting my Ranger 619 Fisherman for the event was Scott Campbell, a regular on the local tournament fishing scene.We arrived at the Nangor Resort on the Ottawa River just outside Cobden Ontario early enough the day prior to the event to launch the Ranger and do a bit of reconnaissance.  As expected, weed growth in the back bays was healthy with water temperatures nearing the mid 70’s, with a slight stain reducing visibility to 5 feet.  Sure enough, the post-spawn Walleye and Pike were still co-locating in the weedy bays at depths of between 2 and 6 feet.  The pre-fish ended abruptly with our running for cover following a text from Scott’s wife alerting us to a tornado warning posted for our area.  The Ranger was back on the trailer and covered ten minutes before a powerful storm rolled through; knocking down a number of trees.

During the red carpet dinner that evening I provided the key note address to the approximately 200 guests made up of local politicians, Lions, volunteer fishing professionals and blind fishers.  I spoke about how fish use there different senses to understand their environment, similar to the way people with vision loss use their hearing and sense of touch.  We also met our blind angler Vicky who joined us aboard the Ranger the next day, a 55-year old woman who had never fished before.  I’m pleased to report both the dinner and speech were very well received, and Vicky seemed like a really great gal. 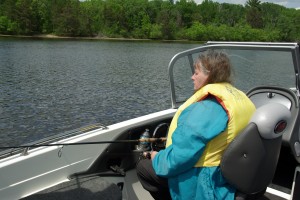 The next morning Scott and I pushed off from the beach in front of the Nangor Resort and motored over to the dock to pick up Vicky.  I tied on a jig and rigged it with a white twister tail for Vicky to troll behind the boat as we moved around using the Minn Kota Terrova.  I also showed Vicky the controls to the stereo so she could take charge of the music for the day.

The trickle start commenced at 8:30  and It wasn’t long before we were heading east along the main channel of the river towards our first spot.  Vicky said she enjoyed a bit of speed and Scott was more than happy to accommodate her wishes; pushing the E-TEC 225hp to its limits on several occasions.  The Ranger Fisherman 619 is one smooth riding boat – handling 2-3 foot waves like ripples.

Within the first couple hours we had a half-dozen decent-sized fish in the livewell.  From that point on, Vicky’s responsibilities were expanded from trolling the twister tail and being in charge of the radio, to reeling in all fish hooked by Scott and I, including the second largest Pike of the day. 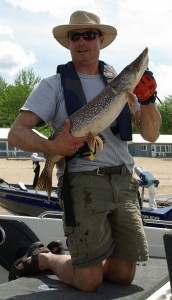 As time drew near to call an end to the days fishing, our team had a decision to make.  Do we release one of our six largest pikes and keep one of the Walleye to try to win the prize for biggest Walleye?  We knew we had a chance at the Pike trophy with Scott’s 9lb bruiser, but with the Walleye slot limit in effect, it meant we couldn’t keep any Walleye over 15.75 inches in length.  I had boated two excellent Walleye that measured 15.5 inches, and after placing the two on a balance beam, we elected to keep the heavier specimen as part of our six fish limit.

Our total weight of 17.5 lbs. put us in 3rd place over-all out of the 24 teams participating.  Scott’s Pike earned us the big Pike trophy.  Unfortunately, there were two other Walleye’s that weighed in heavier than mine.  Regardless, we were all pleased with the day’s results, and Vicky said she really enjoyed the day.

Next year will be BAIT’s 25th anniversary, and the pressure is on to make it an event people will be talking about for years to come.  My plan is to organize a solo kayak event for elite blind fishers.  The competition would take place the day prior to the main event.  Participants would be restricted to staying within the relatively closed bay in front of Nangor Resort, which measures approximately two miles wide by one mile deep.  We would use HobieCat kayaks equipped with their Mirage peddle drive system and a hand-operated rudder.  Provide each kayak fisher with a tactile map, talking compass and GPS, and a shadow boat with livewell.  The challenge will be to get out, catch some fish, and make it back on one’s own with help from a loud speaker placed on the main dock. And to make sure no one has an advantage, each kayak angler would have their eyes covered.